The Photostory of Kriti Mandir 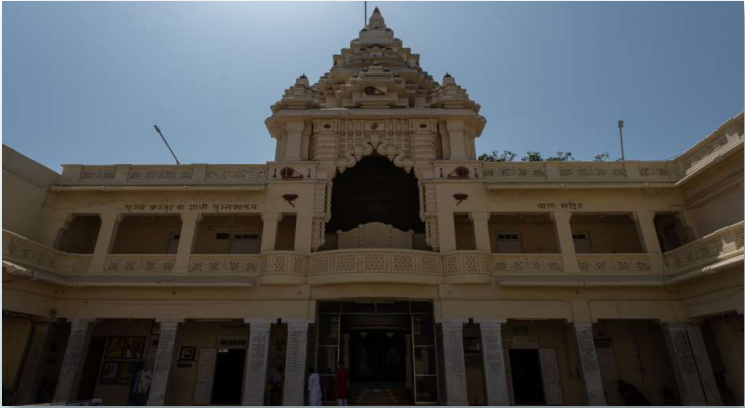 The Photostory of Kriti Mandir

A detailed research and photography project, done by our Diploma batch photography student, Harsh Karena, which focuses on the birthplace of mahatma Gandhi. The memorial that stands adjacent to the modest ancestral house of the family is known as Kirti Mandir.

Photography is the art of capturing light with a camera, usually via a digital sensor or film, to create an image. With the right camera equipment, you can even photograph wavelengths of light invisible to the human eye, including UV, infrared, and radio.

Mahatma Gandhi was born in a home wedged in the narrow lanes of Porbandar, Gujarat on 2nd October 1869. The memorial that stands adjacent to the modest ancestral house of the family is known as Kirti Mandir. When Gandhi was released for the last time in the year 1944 from the Aga Khana Place by the British Government, the residential public of Porbandar, Gujarat had decided to construct a memorial on his birth place.

The kriti mandir is described as a  sprawling courtyard surrounded by a photo gallery that showcases the trajectory of Gandhi’s life. At the far end of the courtyard lies the house, in which he was born and lived for a while. The exact place where he was born is the highlight for many travelers. This was originally a three-storey house that went through some modifications since Mahatma Gandhi’s grandfather constructed it.

There are life-size oil paintings of Mahatma and Kasturba Gandhi side by side in the center of Kirti Mandir. Because Gandhi did not want to be deified, floral garlands are not used. The words, ‘The Truth’ and ‘Non-violence’ , symbolizing his life and preaching’s are placed near their feet.

The foundation of the present modern structure, Kirti Mandir, was laid in 1947 during the lifetime of Gandhi by Shree Darbar Gopaldas Desai, a noted Gandhian and socialist. The national memorial was commissioned by a famous industrialist, Nanjibhai Kalidas Mehta, who donated money to purchase the ancestral house and built the new complex in which Gandhi’s paraphernalia could be showcased for his followers to see.

It is 79 feet tall, representing the 79 years of Gandhi’s life, and includes architectural elements of Hindu, Buddhist, Jain, and Parsi temples, as well as of churches and mosques.