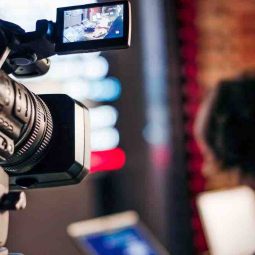 CREO Valley offers a one year Diploma Programme in Film Making (Film & Video Production) for those who desire to make a career in Direction, Film Production, Editing, Sound Editing, Script-Writing, Acting and Cinematography. This is a one year programme which emphasizes on enhancing the skills of the students in Visual & Creative Communication. The students will choose a core area and will specialize in the same.

Diploma in Film Making through CREO Valley School of Film and Television is recognized by QAI London, United Kingdom (UK). At the CREO Valley Students will:

Students enrolling with the course will have to choose one of the core specializations:

Our Film Direction Course is an intensive program which covers a comprehensive range of film making proficiencies including writing, producing, directing, editing and cinematography. It is designed to allow the student a successful transition from the campus to the world of films, television or video production. The program also includes an option of structured internship for merit holding students. In the program our esteemed faculty guides the students to develop his or her individual style of story telling and film making, with their own sense of narration & perspectives. This course gives insights into Direction of Documentaries , Corporate Films , Ad Films & Music Videos. Brief outline:

A Cinematographer plays a very important role in the process of film making. His job is to convey the perspective of the Director to the audience effectively. The Course aims to give the student a thorough training in every required aspect of Cinematography ,including Introduction to different cameras, their functions, lighting, camera angles & movements etc. The course will cover camera work for films, television, sports, documentaries and wildlife shoots. The students will be trained by renowned cinematographers from all these areas. The infrastructure at CREO Valley has been setup to maintain International Standards in teaching Cinematography.

“Cinematography is infinite in its possibilities… much more so than music or language.” – Conrad Hall

The students get theoretical as well as practical inputs on key skills that are required for Digital Cinematography such as:

The Script Writing course at CREO Valley helps you frame you creative stories in an structured manner. You would be able to present original story ideas in a gripping manner, detailed characterizations, scenes and Dialogues. Identify & develop your own style of narration suiting to films, Television, Corporate films, Plays, Ad films & Documentaries.

People have forgotten how to tell a story. Stories don’t have a middle or an end any more. They usually have a beginning that never stops beginning” –Steven Spielberg

Script writing will be taught under the following subheadings

The Acting course at CREO Valley comprises of all the important elements of acting including body movements, expressions, voice culture, scenes and character study, imagination exercises, assertiveness, playback & lip sync etc. The Program emphasizes on theoretical and practical aspects of acting. Theatrical and on-line camera training are an integral part of the course.

With any part you play, there is a certain amount of yourself in it. There has to be, otherwise it’s just not acting. It’s lying. – Johnny Depp

Our acting course is meant to help you get over your inhibitions , to de limit your imagination & to open up to a whole gamut of personalities within yourself. At CREO Valley you get a chance to learn the nuances of the art of acting and performing through traditional & modern techniques.

QAI works with schools, colleges, universities, industry and government internationally to provide high quality, relevant and flexible programmes, qualifications, assessment and consultancy services that are relevant, fit-for-purpose and current and meet with well defined set of values and global standards (mapped against the Qualification and Credit Framework-QCF, which is the new framework for qualifications in England, Wales and Northern Ireland).