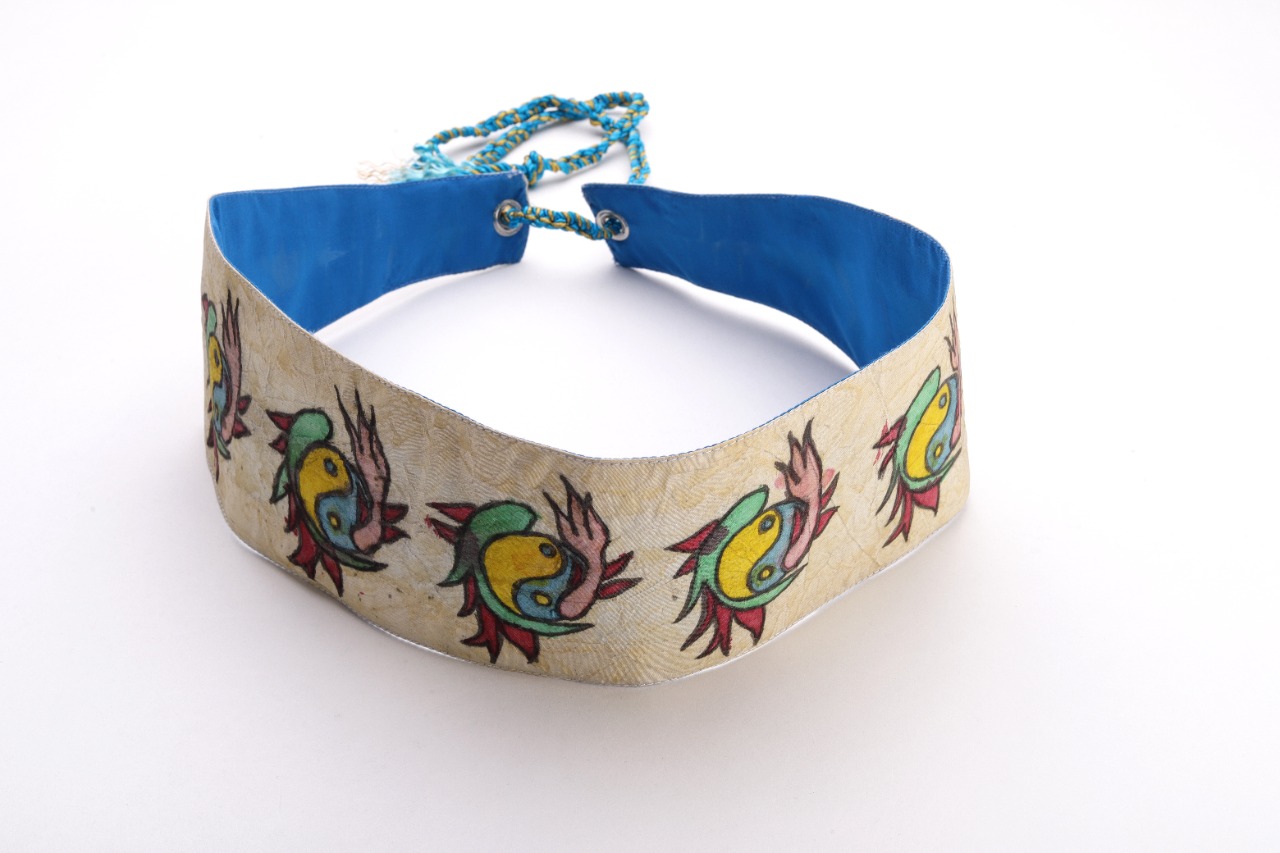 Kalamkari is a type of hand-painted textile produced the Indian state of Andhra Pradesh. Accessory is an item used to contribute, in a secondary manner, to an individual’s outfit. Accessories are often chosen to complete an outfit and complement the wearer’s look. They have the capacity to further express an individual’s identity and personality. Accessories come in different shapes, sizes, hues, etc. The term came into use in the 20th century. The accessories are classified into headgears, foot wears, handbags, belts and glove. Among these, belt is an accessory which has been since ages used for functional and decorative purpose.

A belt is a flexible band or strap, typically made of leather, plastic, or heavy cloth, worn around the natural waist.

Belts are made out of variety of fabrics which ranges from natural to synthetic, plain to printed. In today’s trend it is observed that these belts are used on casual and formal categories of clothing by everyone irrespective of age, personality and gender. The art of Kalamkari is known for its natural colours and free hand style of painting using pen like tool. The fabric is considered spiritual because of the motifs that are taken from epics and images of God and goddess. The uniqueness of Kalamkari is the motif and the natural colours.

Chinese motifs symbolize happiness, wealth, and long life. These motifs have a greater significance in the textile design, and it is also used in the interiors to bring prosperity, luck and charm. Keeping this in mind, the topic of developing Kalamkari belts using Chinese belts were taken up for the study.

The aim of the study is to Design and develop Kalamkari belts using Chinese motifs.

The objective of the Study is –

The methodology of the study is categorised as 3 phases where phase 1 speaks about the observation and study of the Kalamkari art and exploring it practically. Phase 2 deals with the design development process which includes choice of fabric, colour, motif, placement of motif, application of Kalamkari, designing of belts, construction and finishing of belts. Phase 3 is where the acceptance of the designed belts was checked based on the survey method. The survey was conducted among 31 women among age group 18-27.

The result of the study is discussed below:

From the study it can be concluded that Design 1 irrespective of choice of motif, choice of colour combination, design development of belt and cost was preferred by majority of respondents. This study also explains that these kinds of traditional arts can be revived on the trendy styles so that this traditional art of India will be a classic in fashion.

Recycling Clothes – Throwing Out to Throwing on